After craving some tacos (as I always do) a few of my coworkers and I entered the words “tacos” in a local search and found El Tio Tacos in the Union City and West New York area. El Tio Taco is located in a predominantly Hispanic community, this local taco spot was lively for 1 pm on a Monday Aztec paintings of warriors were painted on the wall. I never value the reviews on yelp, for this reason I read the reviews later. I found two complaints comical, one claimed that there wasn’t enough on his taco. This reviewer left a photo of exactly what an Authentic Mexican Taco looks like, as I’ve discussed before, traditional style tends to be a corn tortilla, meat, cilantro and onions. (it’s that simple) Another compliant I saw was that the staff only speak Spanish. While I consider myself fluent enough to order food, I did speak Spanish, while one of my coworkers is fluent. The staff also spoke English so cross that compliant out too.

I ordered one order of the Al Pastor tacos which is an order of 4 for $8. The meat itself was spiced well with good texture, onions and cilantro topped the tacos while being supported by a well made corn tortilla. Running late to a meeting we opted to take out and run back to the office, and eat the tacos there. The 4 tacos came with limes, slices of radishes, delicious roasted green onions, and a few slices of cactus. These tacos really hit the spot, we walked back to our desks and waited for the inevitable food coma. 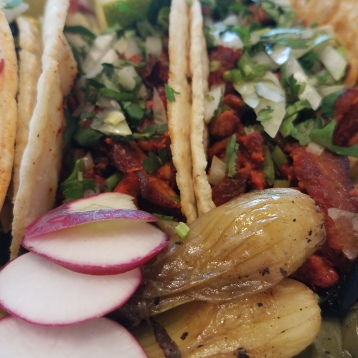 Find tacos – by town or style

Made some updates on my Nopales Cactus & Cuban Black Bean taco recipe, on the site now. This is a really great vegetarian option that impresses non vegetarians like me.
My top taco recipe of 2020, carne asada, marinate some skirt steak with spices, a @modelousa Negra and you're good. Recipe is on the site!
Theres a whole lot going on in the world, tacos make things better. Try this carne asada taco recipe we made for the Day of the Dead. Recipe is on the site now!
Perfect egg breakfast tacos made with Trader Joe's hashbrowns, quick and easy recipe for any hour of the day on the site now.
Barbacoa Taco recipe, easy cooking in the crockpot. Check it out on the site.
On the site now.. Learn how to make ice cream Choco Tacos at home with our recipe! No waffle iron needed!